The Beginning of the Club

It is clear that thoughts were turning to surf safety by the turn of the 20th century, but as it was illegal to swim during daylight (due to the Police Offences Act of 1838) there had been no need to start formal organisations to protect the beachgoing public.

Documented primary sources are hard to find for the period until 1907 so a number of myths and alternative views have been considered over the years.

For example, some accounts have Mr Gocher from Manly (who was finally arrested for illegal bathing on his fourth much publicised attempt in 1902), as being responsible for removing bathing hour restrictions by Manly Council in November 1903.

The earliest source for this  story is an article in 1907 – yet many other councils had already overturned this ban (see this for more on the fact Randwick council and others had already  overturned daylight swimming bans).   (more analysis here)

What is documented is that on 13 November 1902, two policemen attended Bondi and started taking names of those dressed in ‘small trunks’ (from Sydney Morning Herald, 15 November 1902). The Rector of St Mary’s, Waverley, and a Mr Frank McElhone, were apprehended by the police for bathing outside the permitted hours.

This article notes people had been bathing for ’20 years’.   The Inspector General of Police said “So long as bathers wear suitable costumes, and public decency is not outraged, I am unable to see that a practice permitted for so many years should be stopped. Indeed, I do not suppose that the magistrates would inflict penalties for any breach of the Act under the circumstances. Unless, therefore, I receive instructions from the Government to the contrary I do not see my way to take action beyond instructing the police that decency is to be observed.”

As the laws were relaxed, more and more people chose to swim in the ocean, and it became obvious that they needed to be protected from the strong currents and rips.  Between November 1902 and February 1907, at many Sydney beaches, a number of groups started with a view to protecting beachgoers.

By January 1907, Bondi lifesavers were making rescues such as the one on 3rd Jan 1907 of Chas Smith and another 9 year old boy.  Later this would become the myth that Chas became Charles Kingsford Smith – its true he was about that age and based in Sydney in 1907, but there is no other proof that this is true.

Both Manly and Bronte clubs also make claim to be the ‘first life saving club’, but there are no primary sources for these claims.

Bronte’s claim is based on an affidavit made in 1931 that they were the first club, and some meeting minutes in 1907 which stated that it was the 4th AGM – but there are no documents to verify either of these. 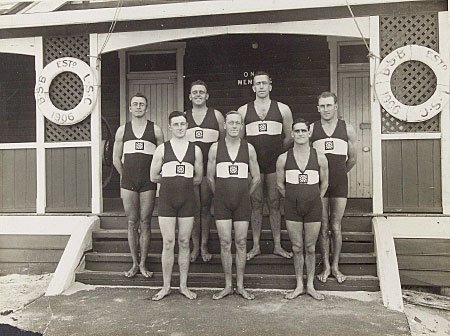 SLSA historians reviewed all claims in 2005 and stated they recognise Bondi as the first surf life saving club.

They stated “A hardly perennial in surf lifesaving history is the question of the first surf club — Bondi or Bronte. As this study has shown, the first group of organised lifesavers formed on Manly Beach in 1899.

While moves on Bondi, Bronte and Manly in early 1907 saw the organisation of irregulars, it was the surf bathers of Bondi who first organised themselves as a formal club in February 1907.” (Between the Flags — One hundred summers of Australian Surf Lifesaving 2006 by SLSA).

Until that time Bondi believed for 50 or more years that it had been formed in Feb 1906 – hence you will find many images of “established 1906” and references to Feb 1906 in incorrect histories.  Based on the research, Bondi resolved in 2006 to change all foundation dates to recognise the accurate information.

Bondi Surf Bathers Life Saving Club was formed at a meeting at the Royal Hotel, Bondi Junction, on 21st February 1907. More detail on this meeting and the initial members is here.

This was documented in formal Minutes of the meeting (copy held at Waverley Library) and a letter from the library confirming receipt at the time.

The club then hosted some displays in March 1907.  Bondi Life Savers were in full action by the time of this “Plucky rescue” in September 1907  and had saved 34 people over the first full season.

By 1910 both Bondi Surf Bathers Life Saving Club and Bondi Surf and Social Club (changed to North Bondi SLSC in 1911) were building up membership and awareness – see The Sun Sept 1910.  As that article states, the Surf Line and Belt (commonly called the ‘Reel’) is the logo of the Bondi Surf Club as Lyster Ormsby invented this life saving device.

He fashioned a model “contrived from hair pins and a cotton reel” and took it to the firm of Olding and Parker, coachbuilders, who from it fashioned a surf reel which was displayed and used on Bondi Beach, on December 23, 1906 (Page 82 Waverley history).

It allowed a swimmer to reach a patient and then the crew on the beach could pull them back to the beach. It required discipline and control to carry this out efficiently.

While lifesaving competitions still include the use of the reel, it was phased out of active service for rescues in 1994 – now ‘Rubber Duckies’ and Boards carry out most rescues.

The First Duty Roster was drawn up in August 1908, and a test swim as a prerequisite for club membership was introduced that September.

The First Bronze Medallion Squad was examined at Bondi Beach on 2 January 1910. It comprised four members of the Bondi SBLSC and the Coogee Life Saving Brigade.

Note: all articles on this page and underlying history pages is available for modification and reuse under the terms of the Creative Commons Attribution-Sharealike 3.0 Unported License and the GNU Free Documentation License.